Why are there always shitty people anywhere? They really suck the patience outta you.

How do we go about deciding our career path without leaving much room for regrets?

Shall I continue what I'm doing or move on?

How do you know if you truly enjoy what you are doing when nothing enjoyable goes on?

Why is it so hard to make certain decisions?
Footprints left by Esther at 12:56 AM

Somehow, little reminders around us come again and again. For some reason, I have been constantly reminded of my passion for the performing arts. I was a dancer for 3 years in primary school, then a saxophonist for 6 years straight from secondary school to junior college. The performer in me then just ceased, with me being an occasional audience to performances.

I miss those times when I was totally immersed in music. No distractions, no other thoughts, just plain enjoying hitting the notes and creating melodies with the rest of the band members.

Then I discovered my passion for writing. Not as deep as how I felt towards music, but enough for me to get a job related to that. Without proper certifications in music, it's almost impossible to carve a career out of it really.

I wonder if it's some sort of calling. There's still that voice in me that says, "Go do what you always wanted to." That is - to pick up another instrument formally or continue playing the saxophone.

Sometimes, being torn between true passion and career is not such a nice feeling. Any advice anybody?
Footprints left by Esther at 11:13 PM

I realized that my blog posts from pre-job hunt success to post-job hunt success has all been revolving work, work and work. Well, there's really nothing much going on besides the 5-day work week and a 2-day weekend to talk about. Over the weekend, one day is spent mostly at home resting and recuperating from the rush and stresses, and the other day reserved for a day out to town to shop. Toastmasters is even taking a break from my life, or rather I'm taking a break from Toastmasters.

Anyway, I've reached my one of my critical points in work. I wonder how it will progress. Shall update about that again.

Saturday just whizzed past. In fact, it's already Sunday. Oh please weekends, time needs to move slower on your days. See what I mean? Work - living for the weekend.

Never mind. I'm watching a movie tomorrow (Sunday) and shopping with my dearest mum.
Footprints left by Esther at 12:45 AM

Today, I heard much more about my current workplace than any other time. How much should I take in? I take it with a pinch of salt. Anyway, it's just my first job. I'm just starting out. Just keep my mouth shut, listen and learn more. I should survive.

Tomorrow I'm looking forward to hear more, from the experienced colleagues. They are a nice bunch and we have good working relationships - one of the most important things to make work a better thing altogether.

It's Friday man. I live in weeks. I hope CNY comes sooner, so I can get my restful break.

Footprints left by Esther at 11:36 PM

I left work at 3.50am (IN THE MORNING) on Friday, or rather Saturday morning. Blah. If I stay on, this might be just the very beginning. But I have been going home at 6.30pm to 7pm for the past two weeks. So... Just suck thumb and do work. Now this weekend feels so short.

Oh well. At least cab fare is claimable. Anyway, I'm already looking forward to next weekend, and to CNY.

The End of a Weekend.

Sunday is soon bidding farewell. Monday is approaching. The rest days end, and the work days begin. Wow, such a surprise huh? Oh well, it's back to work tomorrow. There's this little reluctance to return but there's this little motivation to want to wrap up what I'm currently doing and await for the next project. It's a love-hate relationship with work. I guess everyone has those.

This weekend was spent purely on resting, babysitting and shopping. Usually, it's only shopping. I lead such an interesting life after work begun. Ok, I will stop being sarcastic.

I wonder what will happen if I am no longer wanted by my current company. Would I apply to the government sector or stay in the private sector where I'm not so protected? At least, it's harder to get sacked in the public sector if you work smart enough. Ok, I'm just speaking from what I know - so if you think otherwise, fine. But just let me rant. More updates on that when things really do happen.

Back to more brain cramps tomorrow...
Footprints left by Esther at 11:23 PM

A Day At Work

Just another day at work... with the sights...

Here, besides the account people, everybody else uses a Mac. Well, did I mention that the memory is only 700+MB whereas mine is 4GB at home? You can imagine how 'fast' it is... Oh well, I hope for new machines soon. 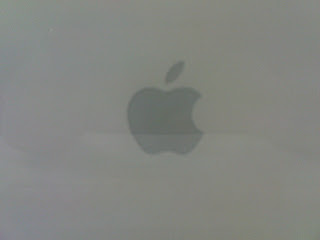 The dog beside my desk. I think it was left behind by someone. But yeah, we have a dog! 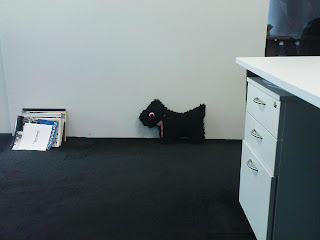 Finally, a photoshoot in the office. When certain photos can't be found over the Internet, we shoot them ourselves. Haha, shan't disclose what is it for. But yeah, funny for sure. 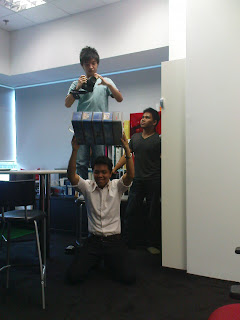 Sometimes, little things like that makes the office more fun to be at.
Footprints left by Esther at 11:34 PM

How Do You Know?

How do you know if you are doing okay or not?

Or if you are doing a good job when nothing is really said about it.

How do you know if the job is the right one for you?

How do you know if that is really your passion?

So far, I haven't really reached the stage of totally immersing in something that I really enjoy - say for example the days of playing the saxophone in the band. Very much different things I know. But the satisfaction from playing music... was something really dear to me. But for sure, pursuing a career in music now is a little too late, and it isn't something I intended to do.

Cross roads are tough. Making a decision and seeing if it works is tougher. I'm feeling so ambivalent.
Footprints left by Esther at 10:42 PM

Like previous years, here's a post dedicated to the arrival of a new year, and some reflections of 2009.

2009 saw the end of university-hood, Toastmasters president-ship and the beginning of a career. I was and still am reluctant to say bye to studying for now. It was a time I truly enjoyed what I was doing. Even more scary to know is how quick one year has passed. One year ago, I was just back from Oklahoma City, freezing myself in the wintry cold, shopping at Wal-mart and going to college - A true blue university which is over a century old. Today, I'm working my ass off.

If you are interested in how my love life went by, well, it was really nothing much. One short relationship came and left, with almost no feelings hurt. I hope for something to come by this year though.

I have a piece of paper printed with a dream I always wanted to fulfill on my book shelf. It says to "Get into graduate school by 2011." I don't know if it'll come true. I'm held back by finances. Unless a scholarship comes by, it might not happen so soon. And, I don't know what my career holds for me. Maybe a year later, staying in the job might seem a better opportunity. But one thing I've always wanted to do was to work a couple of years overseas. We'll see how that can work out.

For now, I'm feeling hopeful in the year 2010. It was a good start that I got employed rather quickly since my job-hunt began. Now, more updates as and when I leave work early!
Footprints left by Esther at 6:03 PM

Last year, on Christmas Day, I was at Disney World in Orlando, Florida. This year, it took another turn - I spent it with my relatives in Malaysia. Since work life has taken off, I was working half day on Christmas eve. Hence, the decision to take a plane back...

I took a turbo-prop plane, and I survived. Here's me telling the tale...

I booked a Firefly flight, the community airline managed by Malaysian Airlines. 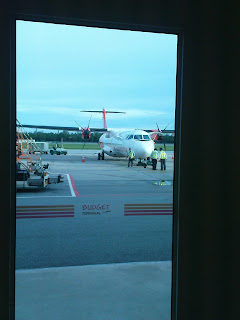 I had to take pictures of it. My second time on a turbo prop plane. I was a tad worried whether it'd be safe. I couldn't sleep the night after I bought my plane ticket online, until I researched a little bit on the type of plane I was going to be on for 1 hour and 10 minutes to reach Malaysia. 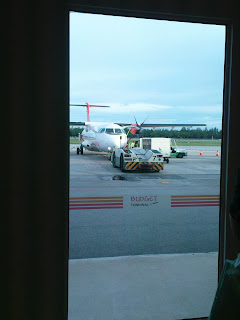 I boarded the flight at the budget terminal. Like the rest of the budget airlines, I walked to the plane. You bet the noise from the propeller was horribly loud. 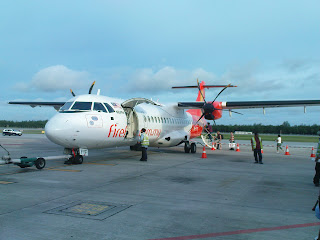 It seemed like I was the first to check-in, so I got the last seat right to the end. Well, you can only get up the plane from the back door, so yeah, first to get in, first to get out too. But last to get drinks. -_-

Seriously, it was very comfortable despite the 76 seater capacity. It had better leg space compared to Tiger Airways. And better crew of course. At least, nicer cabin crew. Oh, and you don't have to pay to check in your luggage, up to a maximum of 20kg's worth. 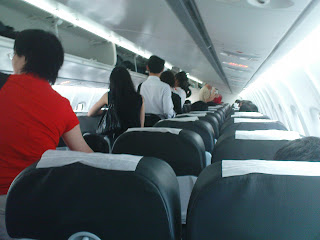 By the way, the plane can't fly above the clouds like the Boeing's do. So I had the view of the land the entire journey. The weather was good, so no turbulence! I heard that in bad weather conditions, the plane swings right to left!

So I safely arrived... at Subang Skypark - the airport that's much nearer to my relative's house. It just sucked that Malaysia no longer allowed the commercial planes to land at Subang after KLIA opened. But with Firefly flying there, more chances for plane rides!

So this was the amount of presents everyone was giving and receiving. 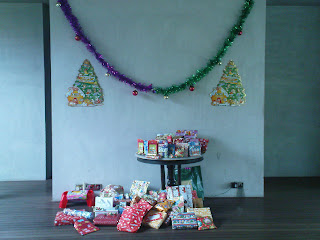 After a few nights, it was time to go home, though with much reluctance. Here am I back at the Subang Skypark, ready to go back home, to clean toilets as well. 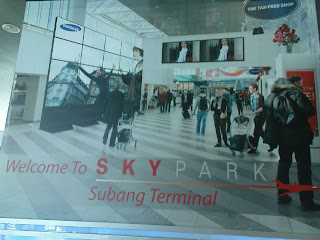 At the departure gate... 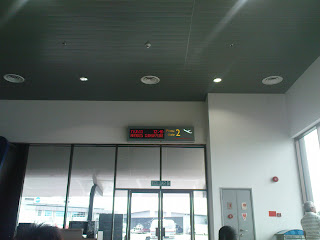 Back home now, with a great impression of Firefly. I'm gonna fly on you again. Soon.
Footprints left by Esther at 5:44 PM 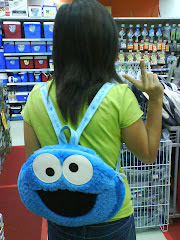